CDA Awards Hailed as ‘Best Ever’ by Guests

Since we founded the Construction Development Alliance (CDA) back in 2008 we have taken an active part in the Young Persons in Construction Awards, which runs every two years.

This year was equally as challenging to organise, but many guests claimed it was the best ever, as the event helped to raise over £1,700 for BlackburnYMCA. Five young people received awards, including RGP’s Michael Burdaky.

After securing SIKA as the main sponsor over 5 years ago, we have had a renowned keynote speaker from the industry each year including; George Clarke, Dominic Littlewood, and this year we were delighted to welcome Charlie Dimmock who really stole the show with a superb presentation.

We were thrilled that Charlie arrived early to greet the 200+ guests and was constantly engaging with everyone. She capped her attendance off with a superb presentation that entertained the audience with her life story, together with outtakes from the Ground Force TV series, which were hilarious, as well as other TV programmes she has participated in.

The award categories that Charlie and the sponsors presented were; 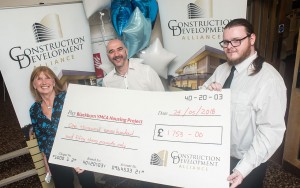 Judges insisted an additional Highly Commended award was presented in the Young Construction Apprentice category, as the competition was so close.

The applicants were judged independently, and RGP are thrilled that Michael Burdaky won the Young Designer of the Year award. Michael has been with RGP for over 4 years training as an Architectural Technician.

In addition to his main role in the business, which involves preparing planning and construction drawings, he also looks after the social media channels for RGP.

Michael said ‘I was really chuffed to win the award. The thing I love most about working for RGP is that if you are ready to learn, there’s always someone willing to teach you. I’d like to thank everyone for their support in helping me win this’.

Our very own Reid Lewis, who has Chaired the CDA for 9 years, organised the event along with the new Chair, Emily Millar of Hawthorn Estates. Reid commented that ‘We’ve always tried to take a lead in the CDA and working closely with colleagues, many of whom have become good friends, we pulled off a fantastic event’.

The CDA always selects a charity to support and this year the Blackburn YMCA Housing Project was chosen. The charity supports many vulnerable young people across the region and the £1,753 raised will be used to improve this vital, secure accommodation.

The next Awards event in 2020 is set to be the biggest and grandest event ever planned by the CDA. Look out for news of it in the future!